As a company we rarely accept cash into our files, but we are seeing an increase in this practice – especially in small dollar amounts. We are also participating in auctions wherein potential buyers might bring cash to the auction which we must accept to keep the business. So with this increasingly common practice, we all need to be more aware of new tricks fraudsters at large are attempting to perpetrate.

The nation has seen this increase occurring not just in small cash amounts, but has also witnessed a strong increase in the amount of cashier's checks and traveler's checks as well. Here is a look at a new scheme the U.S. Department of Homeland Security has put out as a warning: 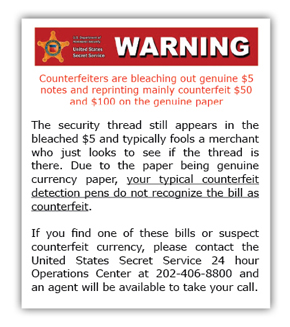 Counterfeit $100 bills have been circulating now at a higher rate across the country. U.S Secret Service Resident Agent in Charge of the Office in Albuquerque, Richard Ferretti, said "it is apparent the suspects are bleaching off the picture and the number "5" on each $5 bill and replacing them with the number 100 and the $100 bill's picture." If you are just using a marking pen to check the bills you will be losing money. The suspects are using a real $5 bill and changing it into a $100. So the marking pen shows it is good because it is a good bill, but of course, it is not a $100, it is a $5 bill.

How to tell a counterfeit $100 bill

The Secret Service believes every company that handles cash should invest in a portable ultraviolet light for their employees. The Secret Service also has noted the most common counterfeited bill is the $20. Below are some pictures of what you would be able to see when looking at a counterfeit bill under a UV light. 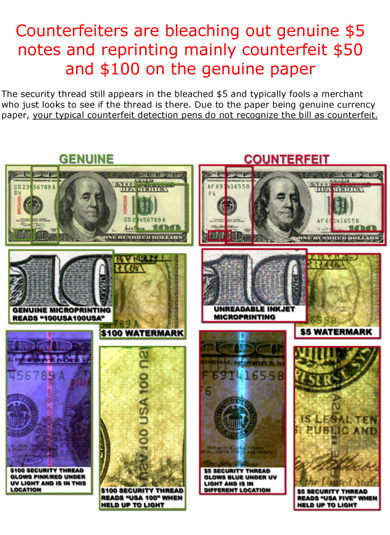 Remember! Accepting cash may require the filing of IRS form 8300. For a detailed explanation of the reporting requirements view our Web-based training module on Cash Reporting or refer to Tech Memo 34E. If the local policy is to not accept cash for any transaction, then continue to adhere to that policy.